Bitcoin (BTC) is close to making a new all-time high and Ether (ETH) finally soared to hit a new high at $4,800. This pushed the total crypto market capitalization above $3 trillion for the first time ever on Nov. 8, according to data from CoinGecko.

Data from Santiment shows that Bitcoin whales holding between 10,000 BTC to 100,000 BTC in their wallets have been buying aggressively in the past few days. They have added 92,000 Bitcoin in the past 25 days, out of which roughly 43,000 have been purchased in the past five days. 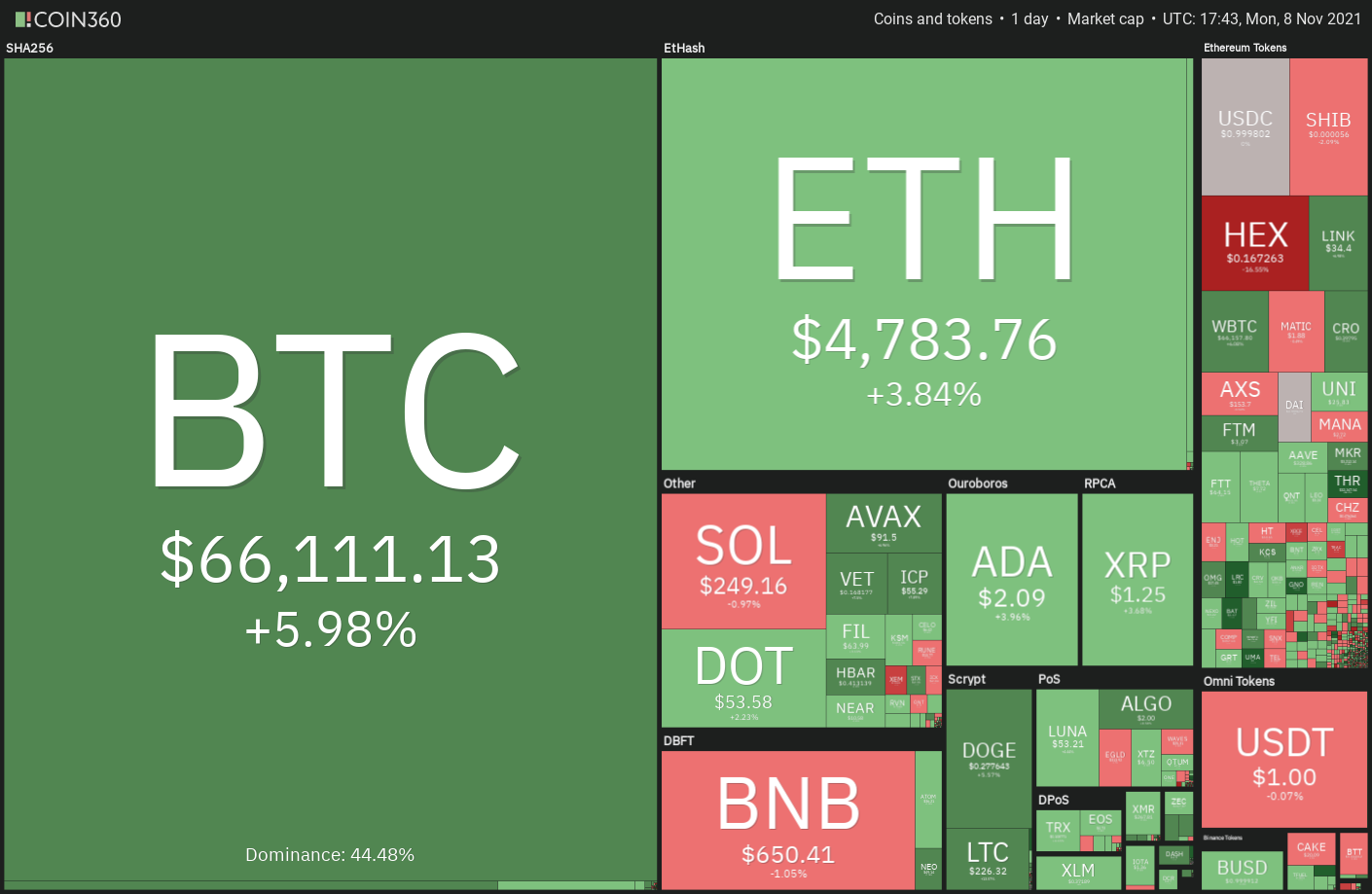 Another important group that has been holding their stash is the Bitcoin miners. Data from CryptoQuant shows that barring a few exceptions, the outflows from miner wallets have largely remained flat in the past few months.

Could the bullish trend in Bitcoin and Ether pull the other major coins higher? Let’s study the charts of the top 10 cryptocurrencies to find out.

Bitcoin broke above the bullish flag pattern on Nov. 2, indicating the possible resumption of the uptrend. The bears repeatedly attempted to pull the price back inside the flag but could not break the support at the 20-day exponential moving average (EMA) ($61,400). 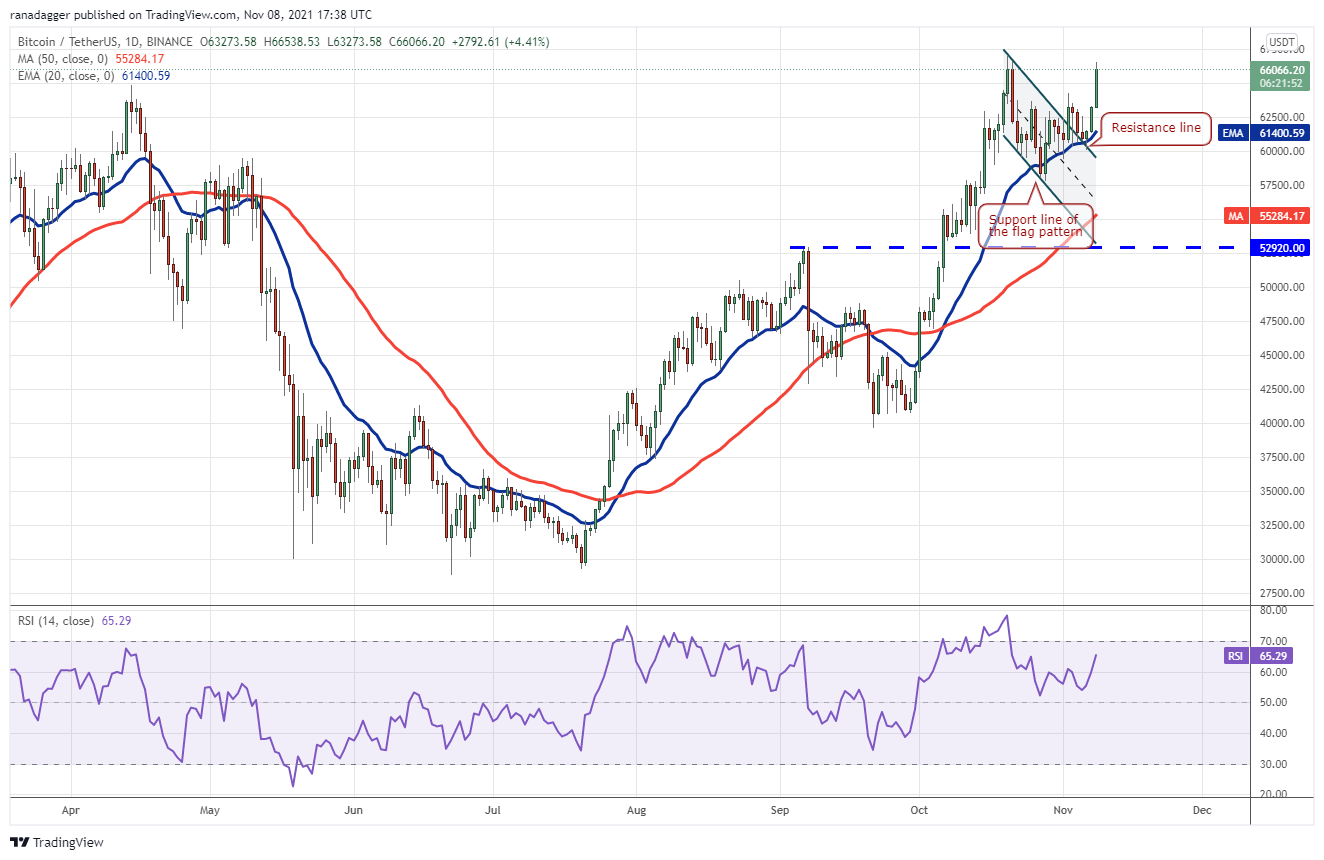 The rising moving averages and the relative strength index (RSI) in the positive territory indicate the path of least resistance is to the upside. If bulls drive the price above $67,000, the BTC/USDT pair could pick up momentum.

The first target on the upside is $75,000, which may act as a resistance, but if bulls overcome this hurdle, the pair could start its march toward the pattern target at $89,476.12.

Contrary to this assumption, if the price turns down from the overhead resistance, the pair could drop to the 20-day EMA. A break and close below this support could open the doors for a possible decline to the 50-day simple moving average (SMA) ($55,284).

Ether rebounded off the breakout level at $4,375 on Nov. 6, indicating that bulls have flipped this level into support. The buying resumed on Nov. 7 and the bulls have pushed the price above the previous all-time high at $4,665.87 on Nov. 8. 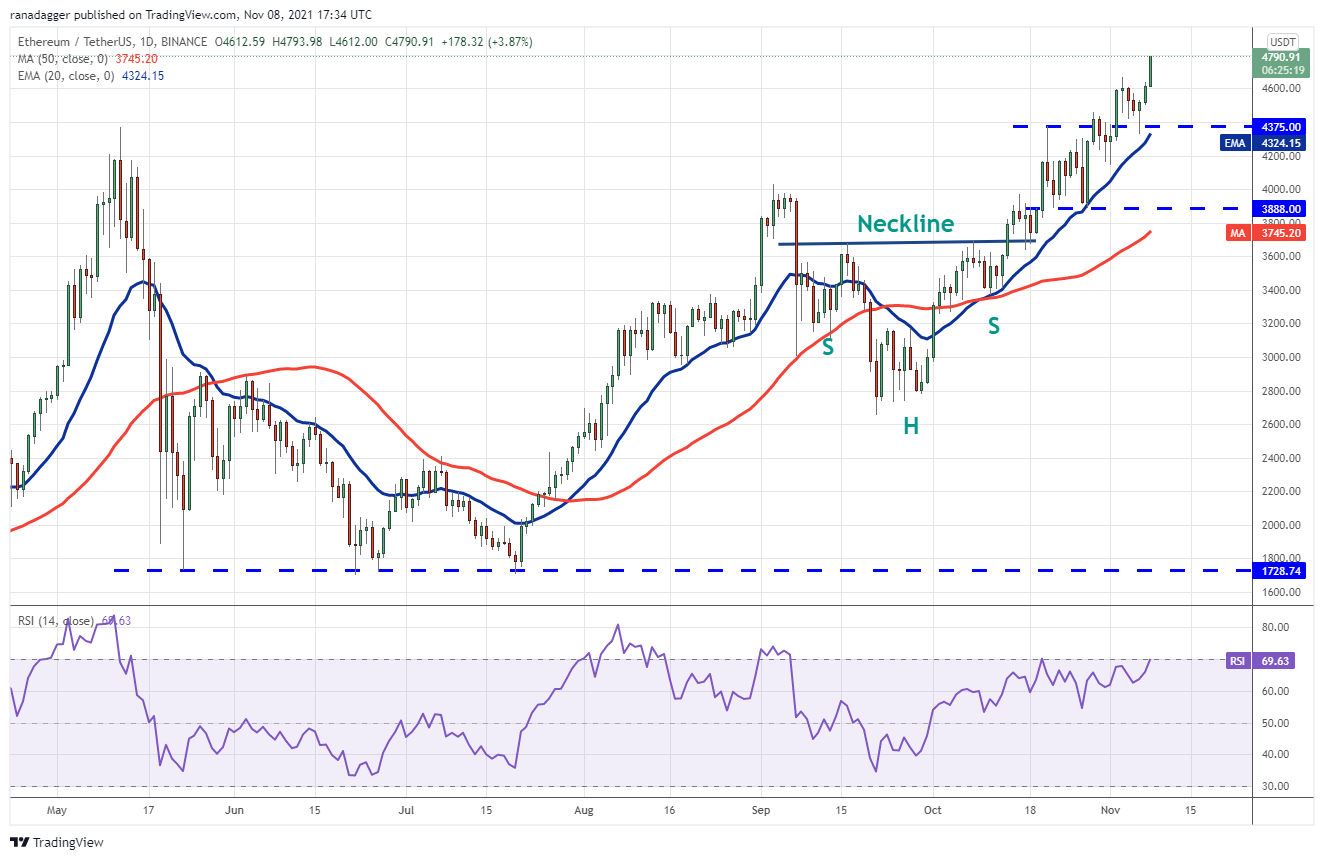 The ETH/USDT pair could now rally to the psychologically important level at $5,000 where the bears are expected to mount a stiff resistance. If the price turns down from $5,000 but does not break below the 20-day EMA, it will suggest strong buying on dips.

If this support cracks, it will signal that the bullish momentum may be weakening. The pair could then drop to $3,888.

Binance Coin (BNB) picked up momentum after breaking out of $518.90. The bears are attempting to defend the overhead resistance at $691.80 as seen from the long wick on the Nov. 7 candlestick. 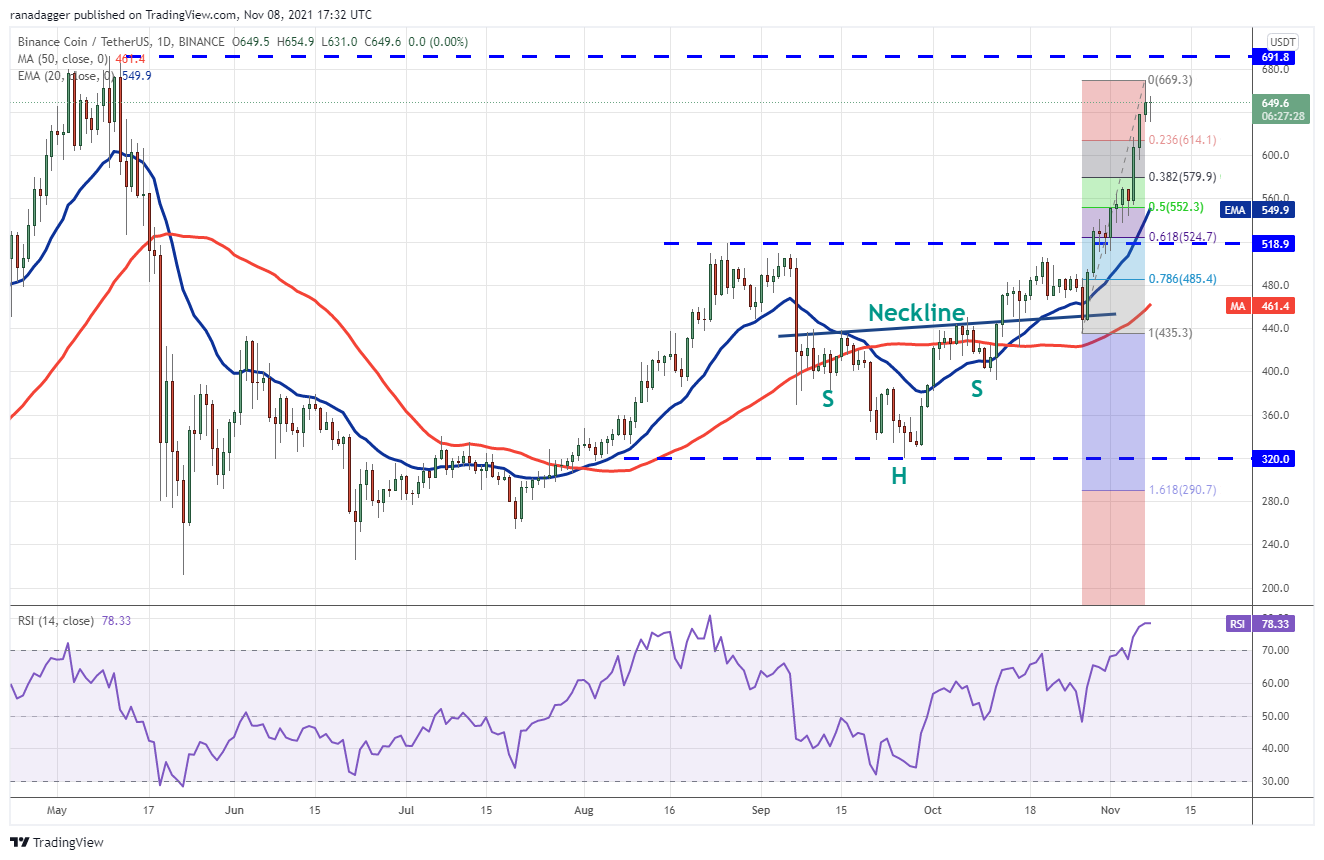 If bulls do not give up much ground from the current level, it will indicate strength and increase the prospects of a break above the overhead resistance. If that happens, the BNB/USDT pair could move up to $717.80.

Although the upsloping moving averages indicate advantage to buyers, the overbought levels on the RSI suggest that the pair could soon enter a minor consolidation or correction. The first support on the downside is $600.

If this support is breached, the pair could drop to the 20-day EMA ($549). Such a deep correction could delay the start of the next leg of the uptrend.

Cardano (ADA) had been trading between the 20-day EMA ($2.04) and the critical support at $1.87 for the past few days. Although the bears successfully defended the 20-day EMA, they could not sink the price below $1.87, indicating accumulation at lower levels. 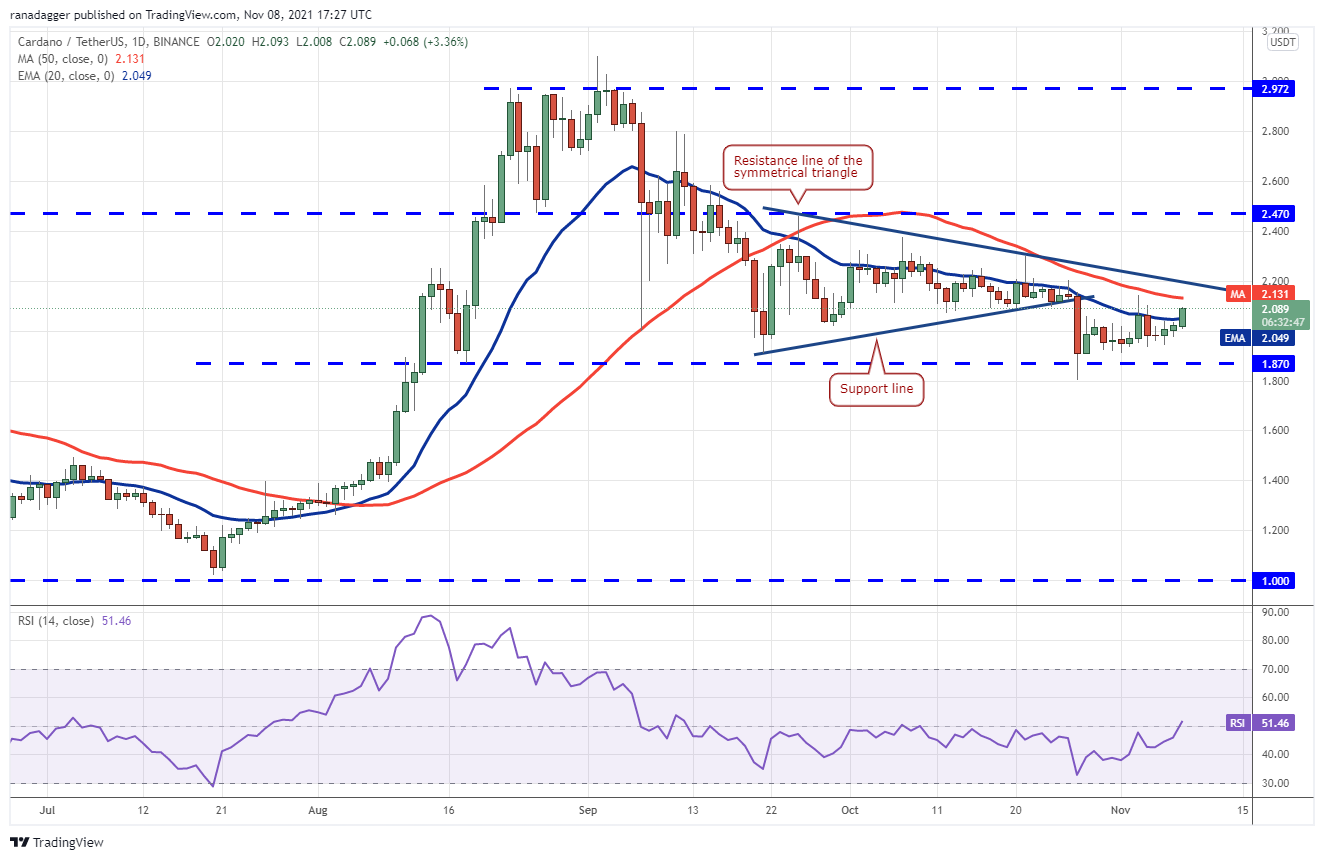 The buyers have propelled the price above the 20-day EMA and the RSI has also climbed into the positive zone, indicating that the bearish momentum may be weakening. The ADA/USDT pair could now rise to the resistance line.

A break and close above the resistance line will indicate that bulls are back in the game. The pair could then rise to $2.47 where the bears are likely to mount a stiff resistance.

Alternatively, if the price turns down from the downtrend line, the bears will again try to sink the pair below $1.87.

Solana (SOL) is in a strong uptrend and trading inside an ascending channel. The up-move is facing profit-booking near the resistance line of the channel but a positive sign is that the bulls have not given up much ground. 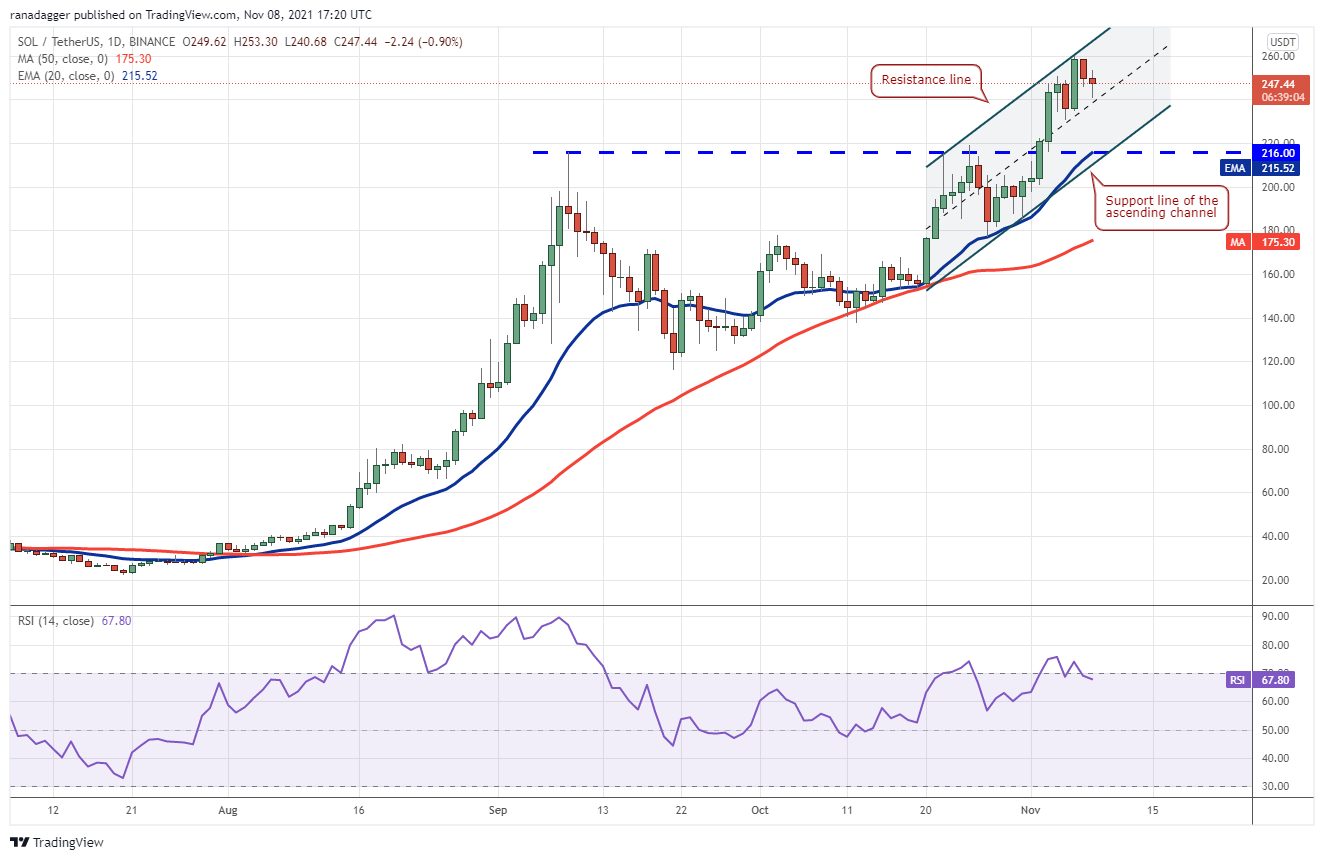 If the price rebounds off the centerline of the channel, the bulls will make one more attempt to push the SOL/USDT pair above the resistance line. If they manage to do that, the pair could rally to $300 and then to $321.

Alternatively, if the price breaks below the centerline, the pair could drop to the support line of the channel. A break below the channel could start a deeper correction to $200 and later to the 50-day SMA ($175).

Ripple (XRP) broke above the $1.24 overhead resistance on Nov. 8 but the bulls are finding it difficult to sustain the breakout. This suggests that bears are active at higher levels. 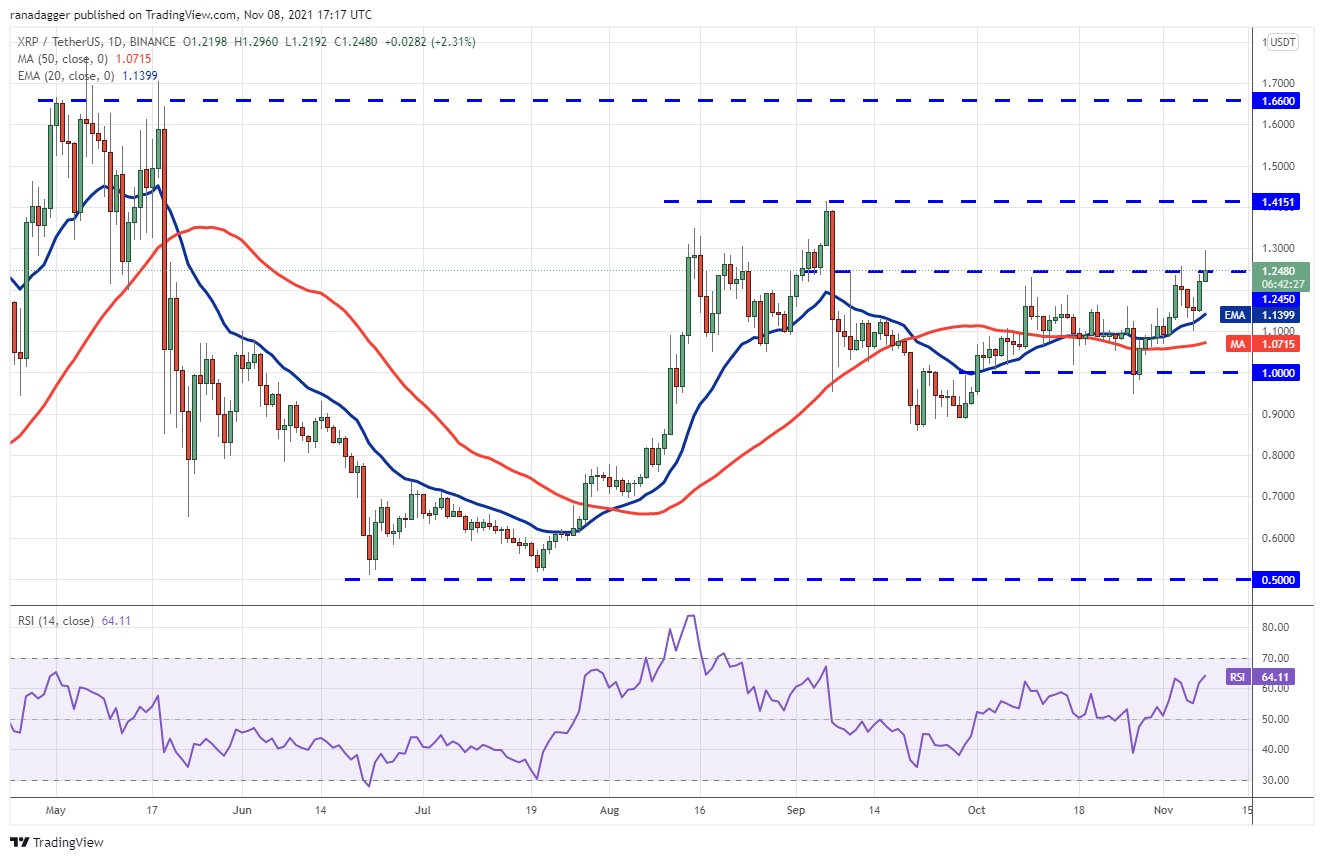 The 20-day EMA ($1.13) is sloping up and the RSI is in the positive zone, indicating the path of least resistance is to the upside. If bulls sustain the price above $1.24, the XRP/USDT pair could rise to $1.41.

This level could again act as a stiff resistance but if buyers overcome this hurdle, the bullish momentum could pick up.

On the contrary, if the price turns down from the current level, the pair could drop to the 20-day EMA. The selling could intensify if the support cracks and the pair may drop to $1.

Polkadot (DOT) bounced off the breakout level at $49.78 on Nov. 6, indicating that bulls are attempting to flip this level into support. The buyers will now attempt to push the price above $55.09 and resume the uptrend. 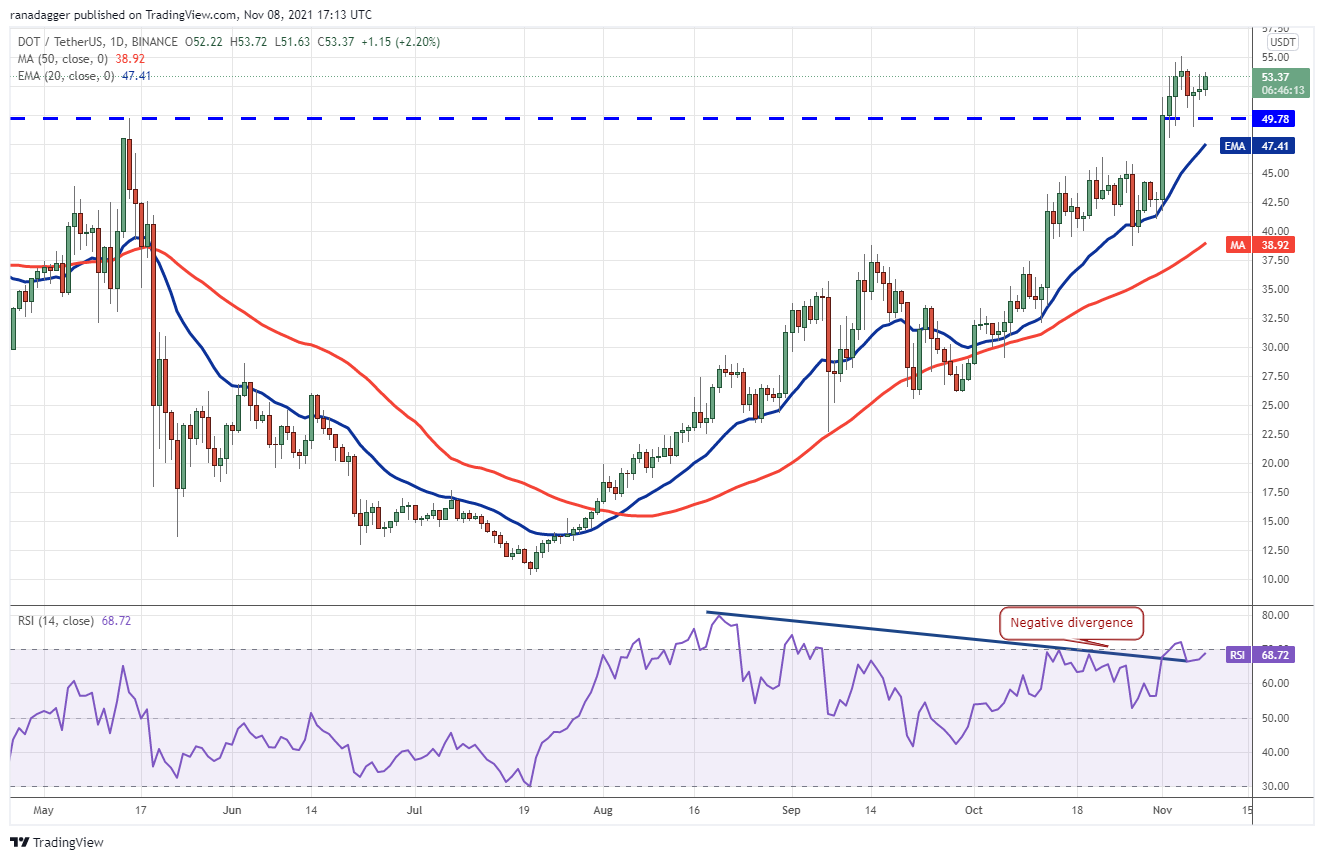 If they succeed, the DOT/USDT pair could start its northward march toward the next target objective at $63.08. The upsloping moving averages and the RSI near the overbought zone indicate that buyers have the upper hand.

If the price turns down from the overhead resistance, the pair could remain range-bound between $49.78 and $55. A break and close below $49.78 will be the first indication that traders may be booking profits on their positions.

SHIBA INU (SHIB) has been in a strong corrective phase in the past few days. Although the price rebounded from just below the 20-day EMA ($0.000053) on Nov. 5, the bulls are struggling to sustain the higher levels. 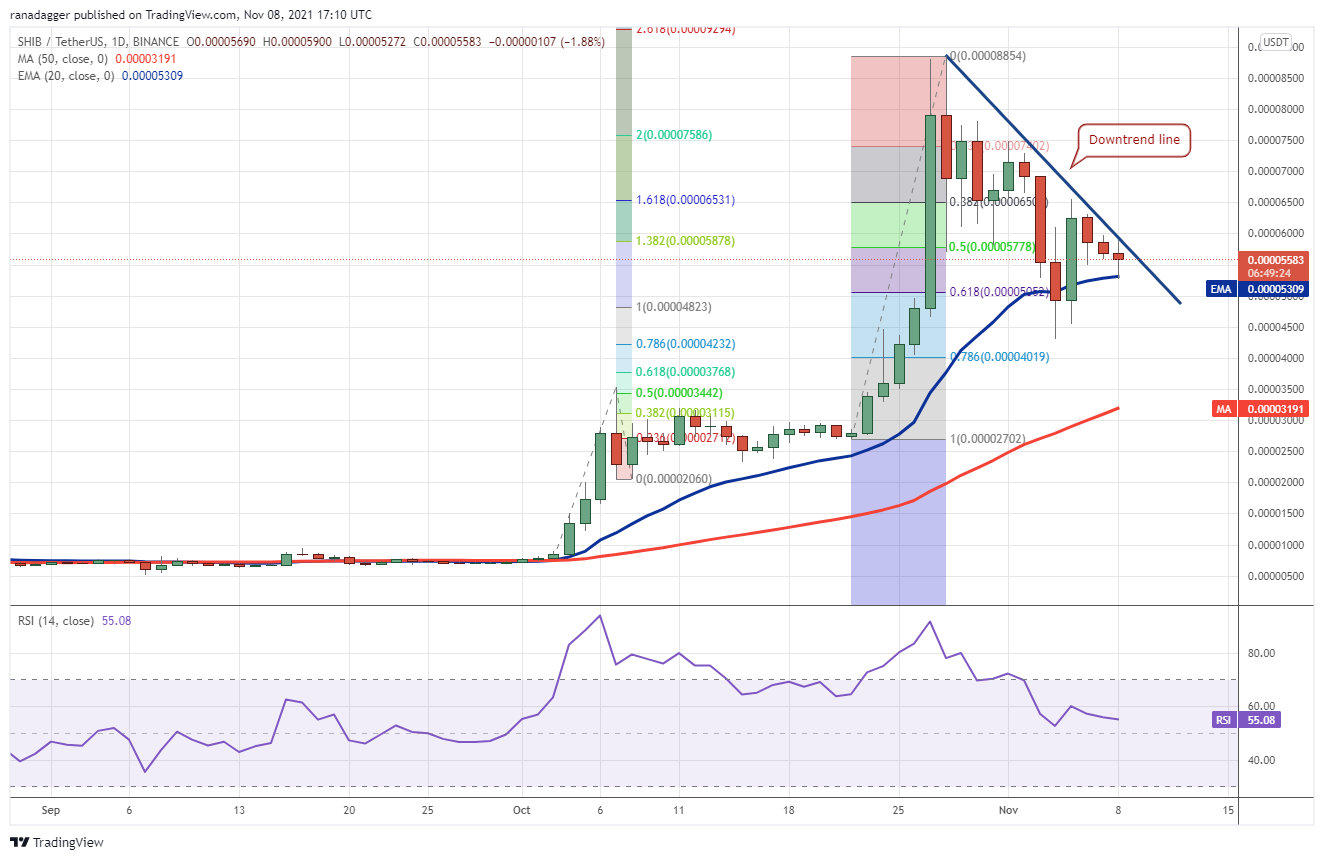 This suggests that traders are selling at higher levels. If bears sink the price below the 20-day EMA, the SHIB/USDT pair could drop to $0.000043. This is an important level to keep an eye on because if it breaks down, the correction may extend to $0.000040.

A breakout and close above the downtrend line will be the first sign that the selling pressure may be reducing. The pair could then rise to $0.000065 and later to $0.000075. 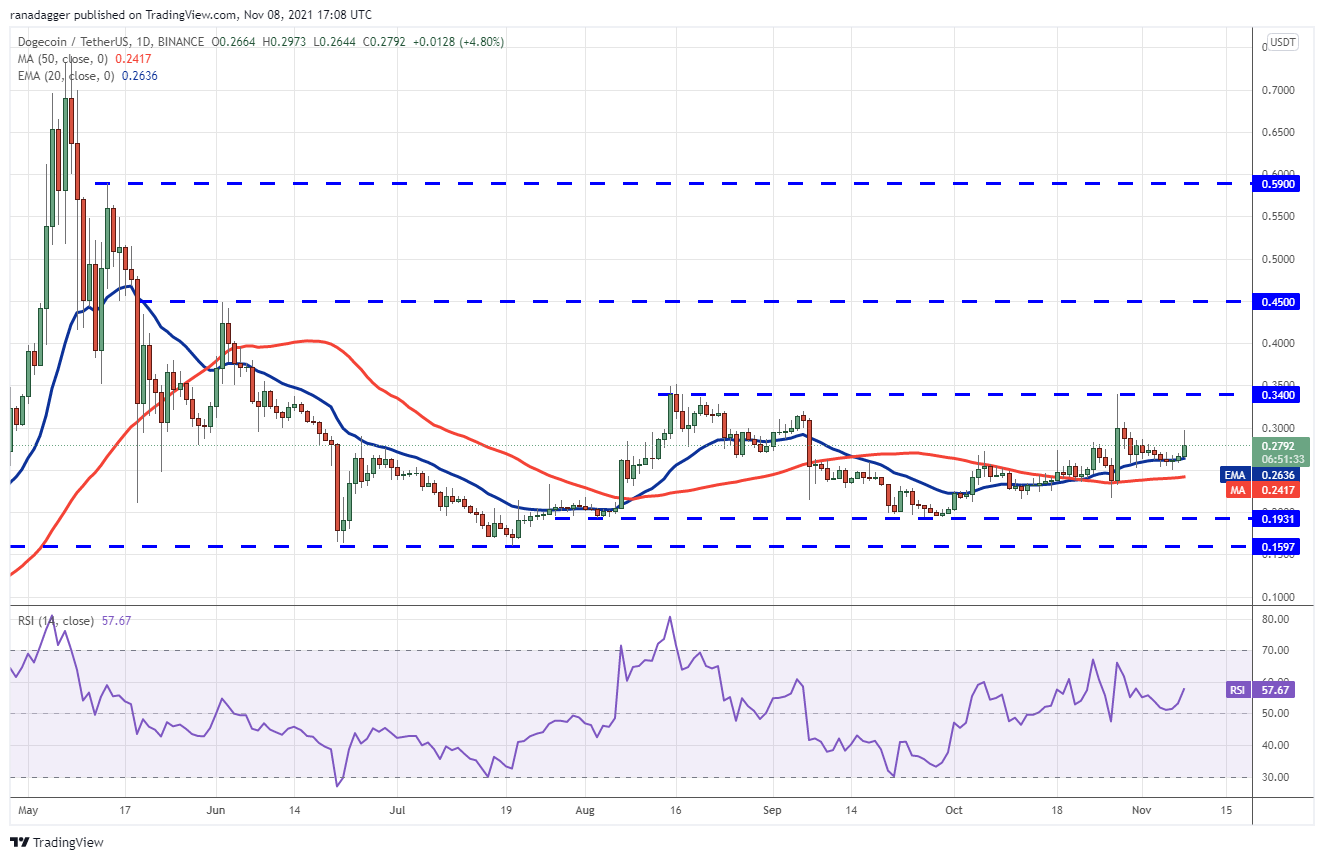 The gradually rising 20-day EMA and the RSI in the positive territory indicate that bulls have a slight advantage. The bulls are attempting to push the price to the stiff overhead resistance at $0.34 but the long wick on Nov. 8’s candlestick suggests that bears are selling on rallies.

If the price turns down from the current level, the bears will again try to pull the price below the 20-day EMA. If that happens, the DOGE/USDT pair could drop to the 50-day SMA ($0.24). A break below this support may result in a decline to $0.19.

Avalanche (AVAX) is in a strong uptrend. The up-move picked up momentum after the price rose above the overhead resistance at $81. The bulls will now try to drive the price to $100. 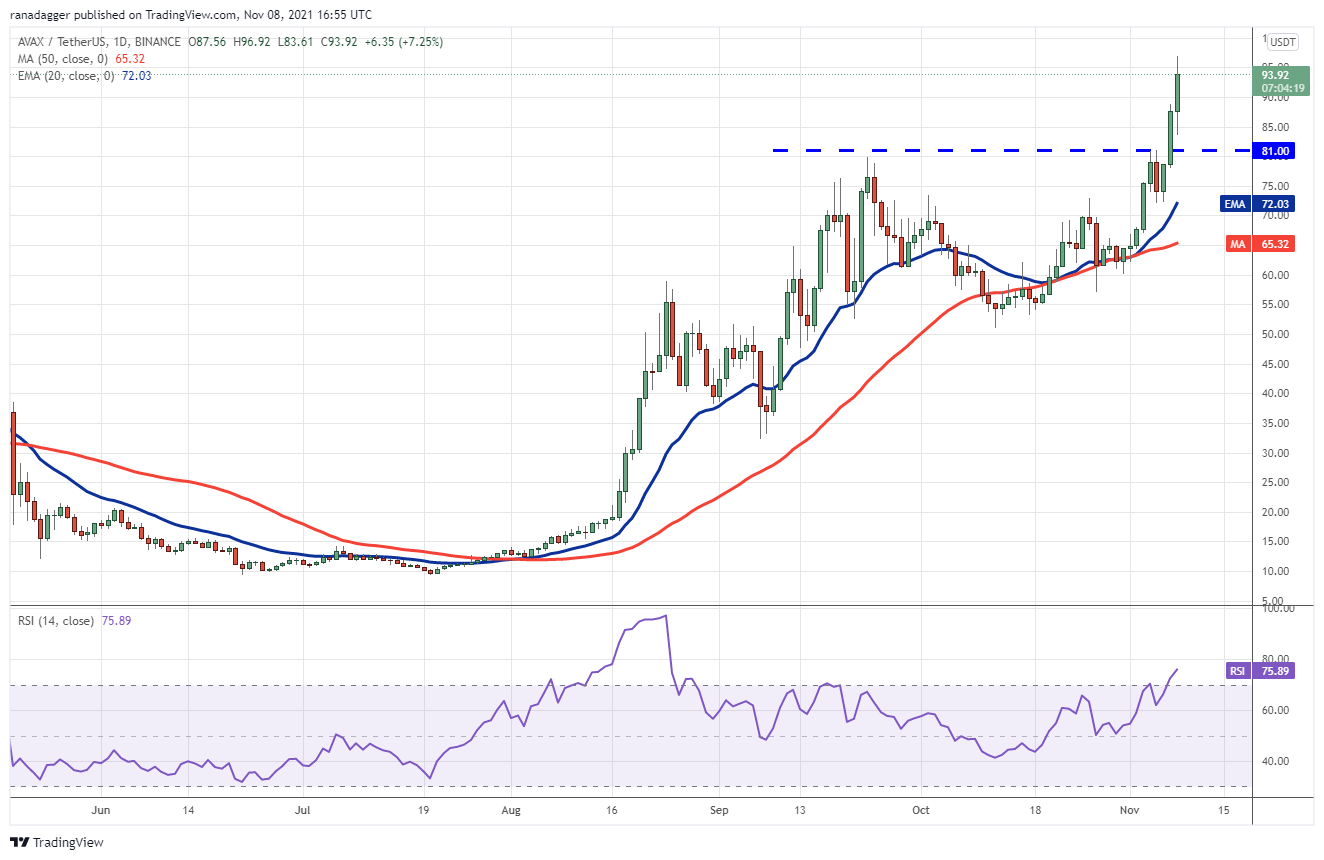 However, if the price turns down from the current level, the pair could drop to the breakout level at $81. If bulls flip this level into support, the possibility of the continuation of the uptrend increases.

The first sign of weakness will be a break and close below the $81 support. The pair could then drop to the 20-day EMA, which is an important level for the bulls because a break below it could signal a short-term top has been made.

The views and opinions expressed here are solely those of the author and do not necessarily reflect the views of Cointelegraph. Every investment and trading move involves risk. You should conduct your own research when making a decision.