Bitcoin (BTC) and Ether (ETH) have again risen to a new all-time high on Nov. 10, indicating that the trend remains firmly in favor of the bulls.

In a recent report from Kraken exchange, analysts said that the current quarter’s price action has a correlation of 0.88 with the fourth quarter of 2017.

Bitcoin had rallied 220% in 4Q 2017 and if history repeats itself, Bitcoin could reach $96,355, which could potentially be this cycle’s top. 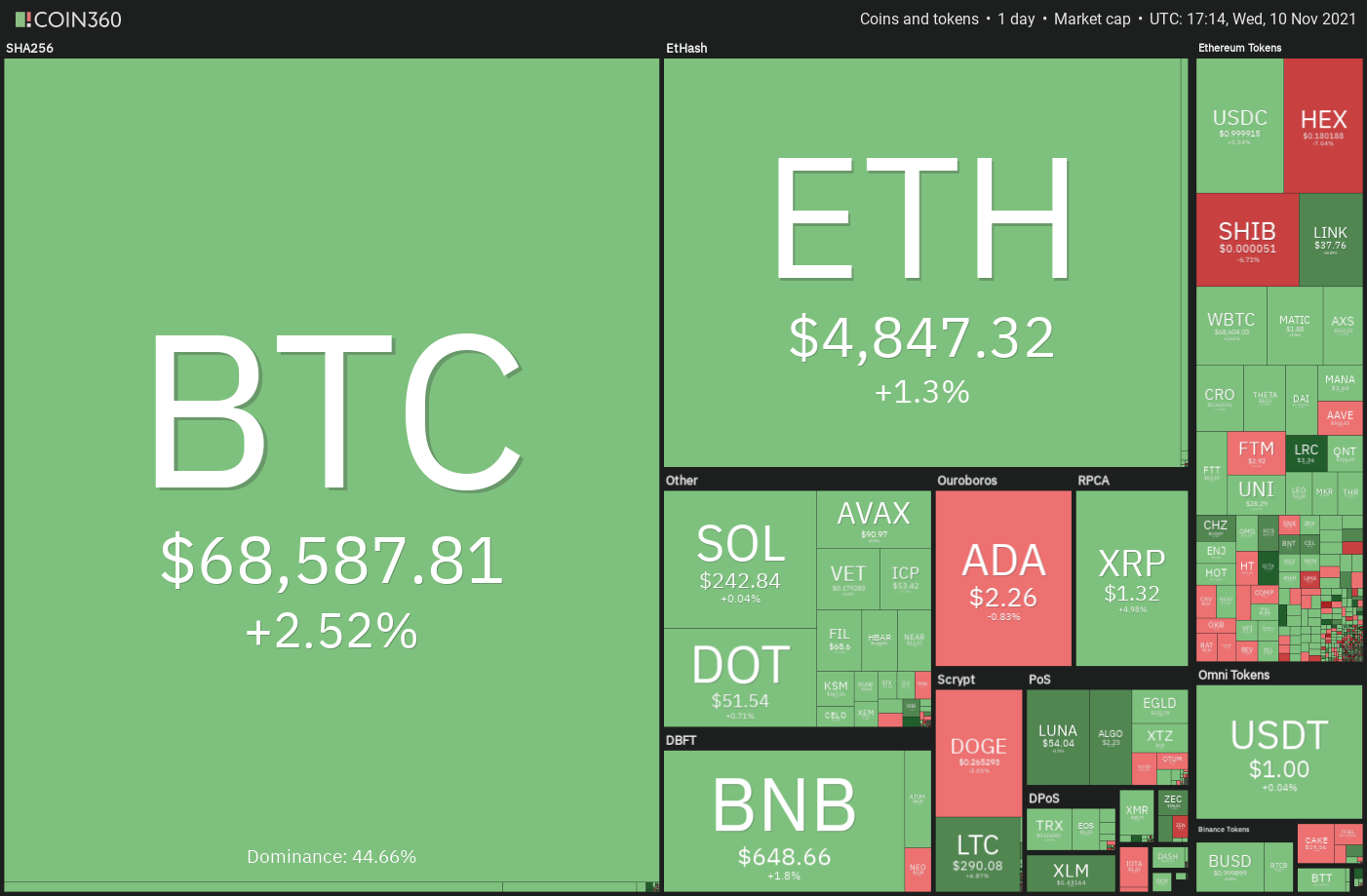 Long-term holders, who have held their Bitcoin for more than 12 months, are reluctant to spend their coins, according to Glassnode’s “The Week On-Chain” report. Another positive is that investors continue to withdraw coins from centralized exchanges whose share of supply has dropped to a new record low at 12.9%.

Can Bitcoin and altcoins sustain their bullish momentum or will profit-booking drag prices lower? Let’s study the charts of the top 10 cryptocurrencies to find out.

The bears tried to pull Bitcoin below the breakout level at $67,000 on Nov. 9 but they could not sustain the lower levels. The modest pullback indicates that bulls are buying on every minor dip. 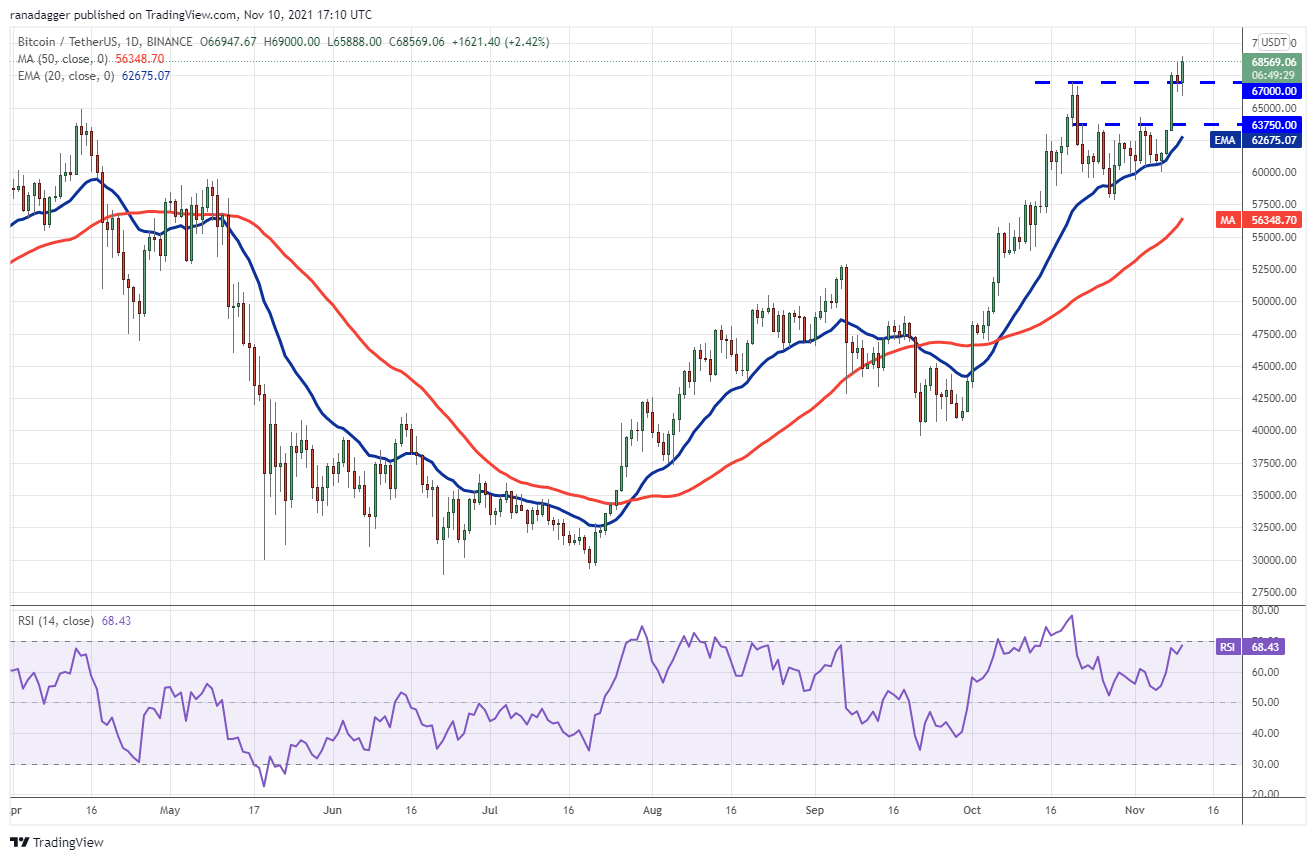 Both moving averages are sloping up and the relative strength index (RSI) is near the overbought territory, indicating that bulls are in control.

If buyers sustain the price above $67,000, the BTC/USDT pair could pick up momentum and accelerate to the next target objective at $75,000. A break and close above this resistance may open the doors for a possible rally to $89,476.12.

On the downside, the zone between $67,000 and $63,750 is likely to act as a strong support. If this zone is breached, it will indicate that traders may be aggressively booking profits. The pair may then drop to the 50-day simple moving average (SMA) ($56,348).

Ether has been trading inside an ascending channel for many days. The bulls are attempting to keep the price above the centerline of the channel. The major target to watch on the upside is the psychological level at $5,000. 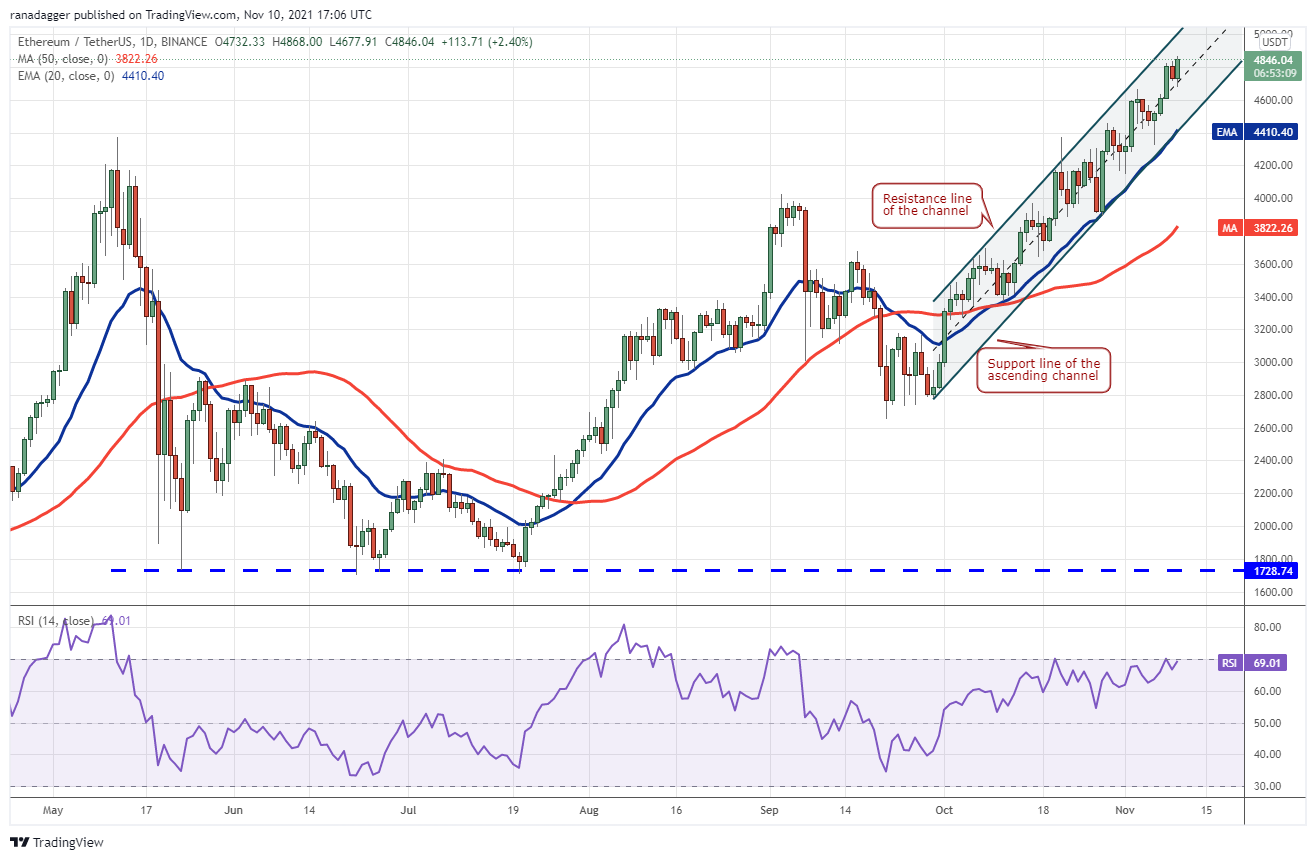 This level is likely to act as a stiff resistance but if bulls do not give up much ground, the ETH/USDT pair may overcome the barrier and rally to the next target objective at $5,283.17.

If the price turns down from the resistance line of the channel, the pair could drop to the support line. This is an important level to keep an eye on because a break below it will suggest a possible change in the short-term trend.

The pair could first drop to $4,146.30 but if this support also gives way, the correction could reach the psychological support at $4,000.

Binance Coin (BNB) slipped below the $630 support on Nov. 11 but the bears could not sustain the lower levels. The altcoin staged a strong recovery and the bulls are now trying to push the price above $669.30. 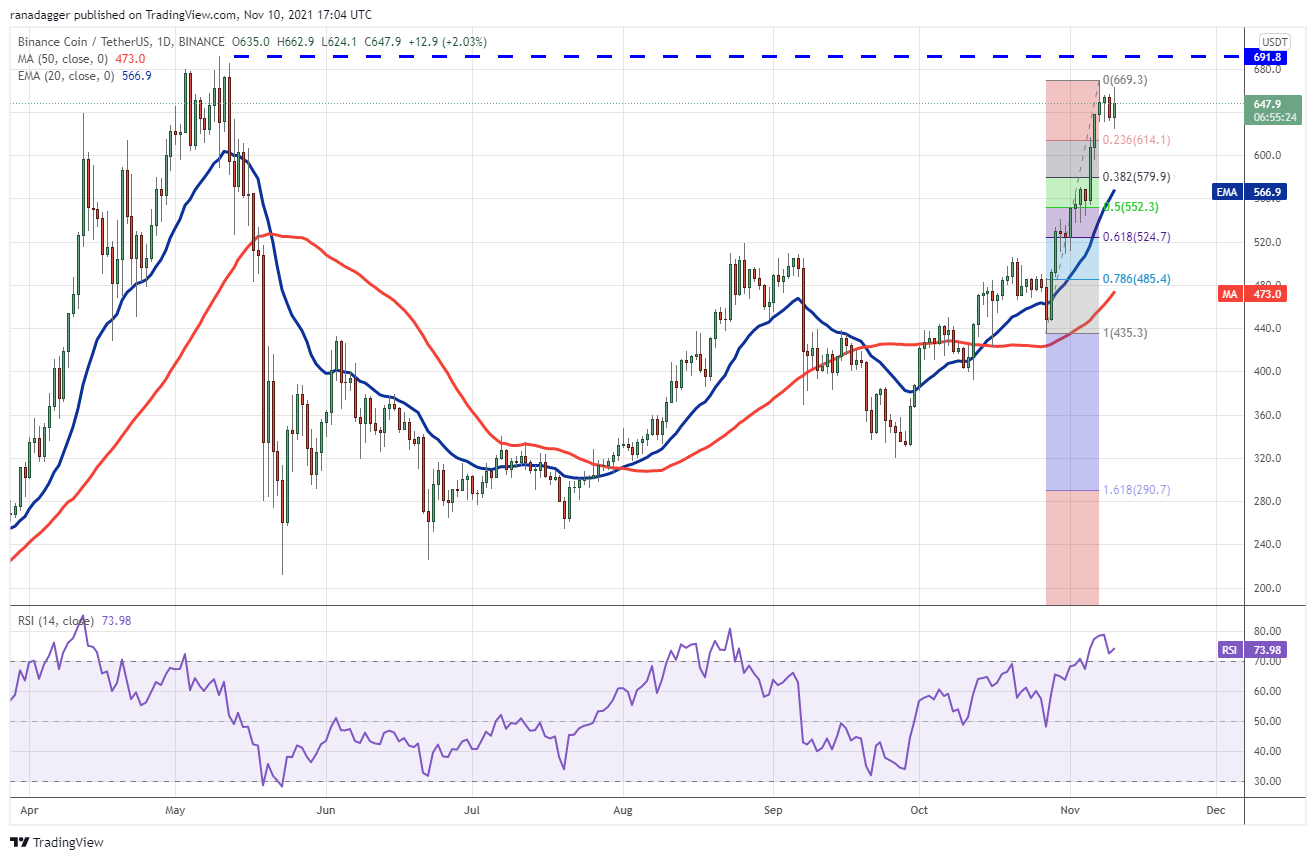 If they manage to do that, the BNB/USDT pair will challenge the overhead resistance at $691.80. The rising moving averages and the RSI in the overbought zone indicate the path of least resistance is to the upside.

On the other hand, if the price turns down from the overhead resistance, it will suggest that traders are defending the level aggressively. The bears will then make one more attempt to pull the price down to the 20-day exponential moving average (EMA) ($566).

Cardano (ADA) broke and closed above the downtrend line on Nov. 9, indicating that the selling pressure is decreasing. The bears are currently attempting to pull the price back below the breakout level. 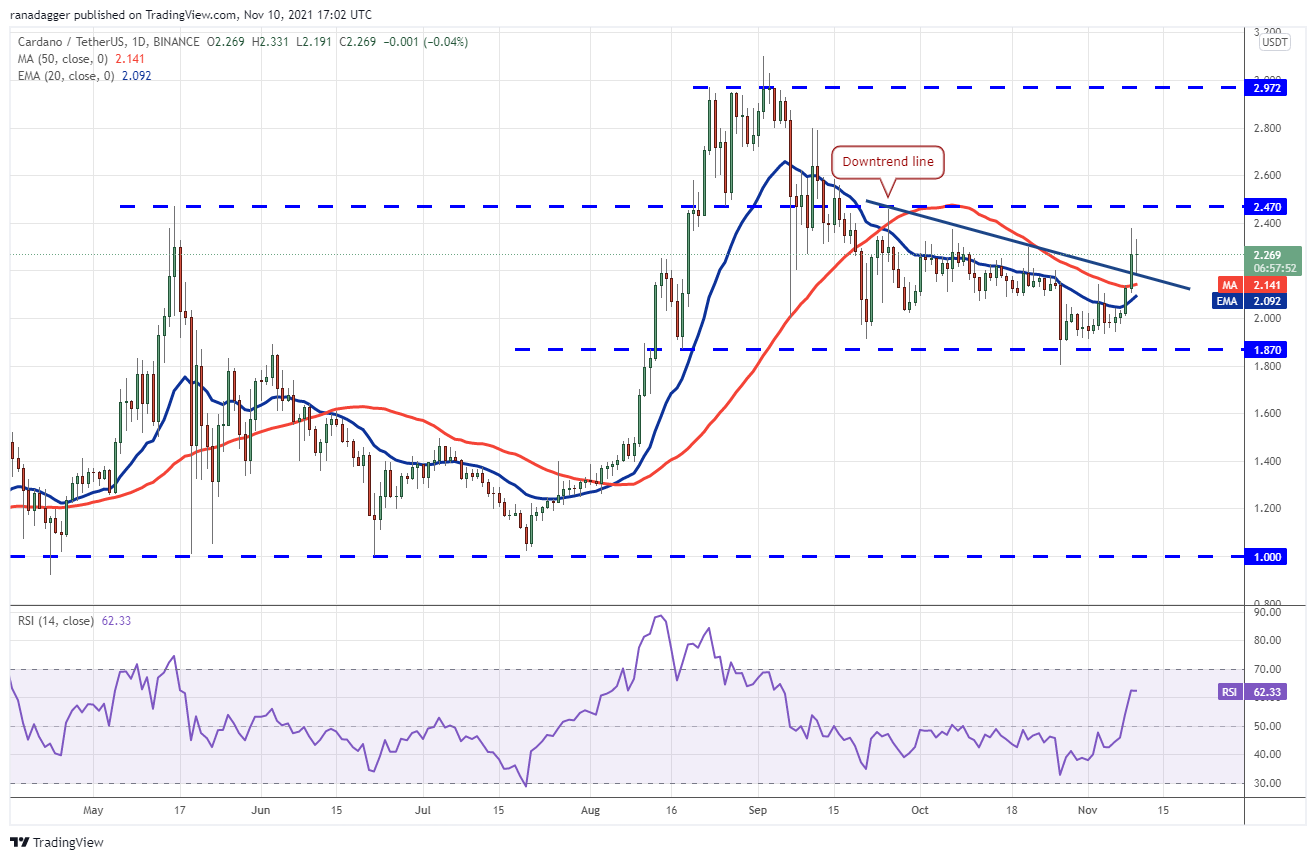 If they succeed, it will suggest that the break above the downtrend line may have been a bear trap. The ADA/USDT pair could then drop below the moving averages and retest the critical support at $1.87.

On the contrary, if the price rebounds off the breakout level, it will suggest that bulls are buying on dips. The pair could then rally to the overhead resistance at $2.47. This is an important resistance for the bears to defend because if it cracks, the pair could rise to $2.80.

The long tail on Solana’s (SOL) Nov. 8 candlestick shows buying at the centerline of the ascending channel. However, the bulls could not build on this advantage as strong selling at higher levels pulled the price below the centerline on Nov. 9. 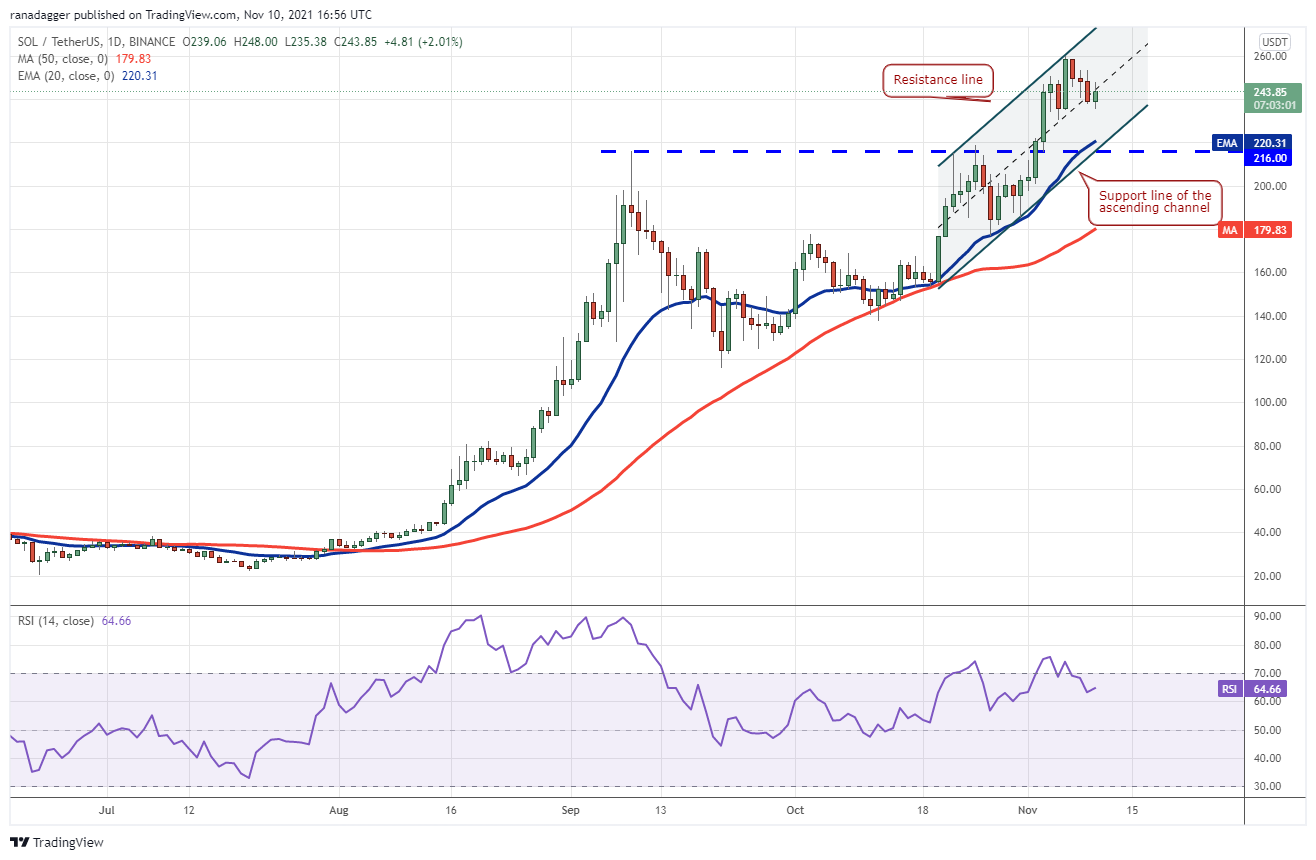 The SOL/USDT pair could now drop to the support line of the channel. A strong rebound off this support will indicate that the up-move remains intact. Both moving averages are sloping up and the RSI is in the positive territory, signaling that bulls have the upper hand.

A break and close above the channel will indicate strength and the pair may rally to $300 and then to $321. Conversely, if bears sink the price below the channel and the $216 support, the decline could extend to the 50-day SMA ($179).

Ripple (XRP) broke and closed above the overhead resistance at $1.24 on Nov. 8, signaling that bulls are attempting a comeback. The bears tried to pull the price back below $1.24 but failed to sustain the lower levels. 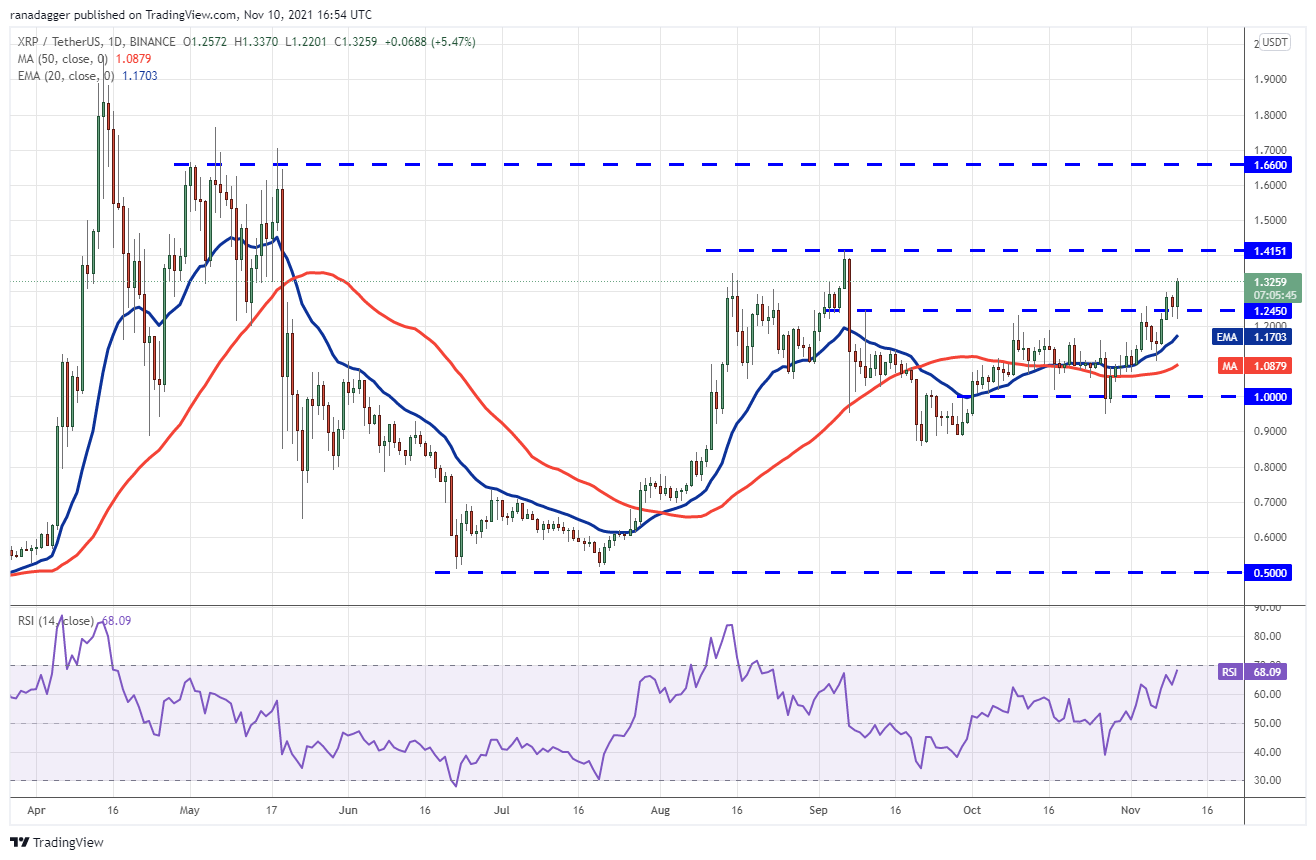 This suggests that bulls have flipped the $1.24 level into support. This level could now act as a launchpad for the next leg of the up-move. The XRP/USDT pair could rally to the overhead resistance at $1.41 where the bears are expected to mount a stiff resistance.

If the price turns down from $1.41 but rebounds off the $1.24, it will suggest that traders continue to buy on dips. That will increase the likelihood of a breakout of $1.41. This positive view will be negated if the bears sink and sustain the price below the 20-day EMA ($1.17).

Polkadot (DOT) turned down from $53.87 on Nov. 8, indicating that bears are selling at higher levels. The price has dipped back to $49.78, which is likely to act as a strong support. 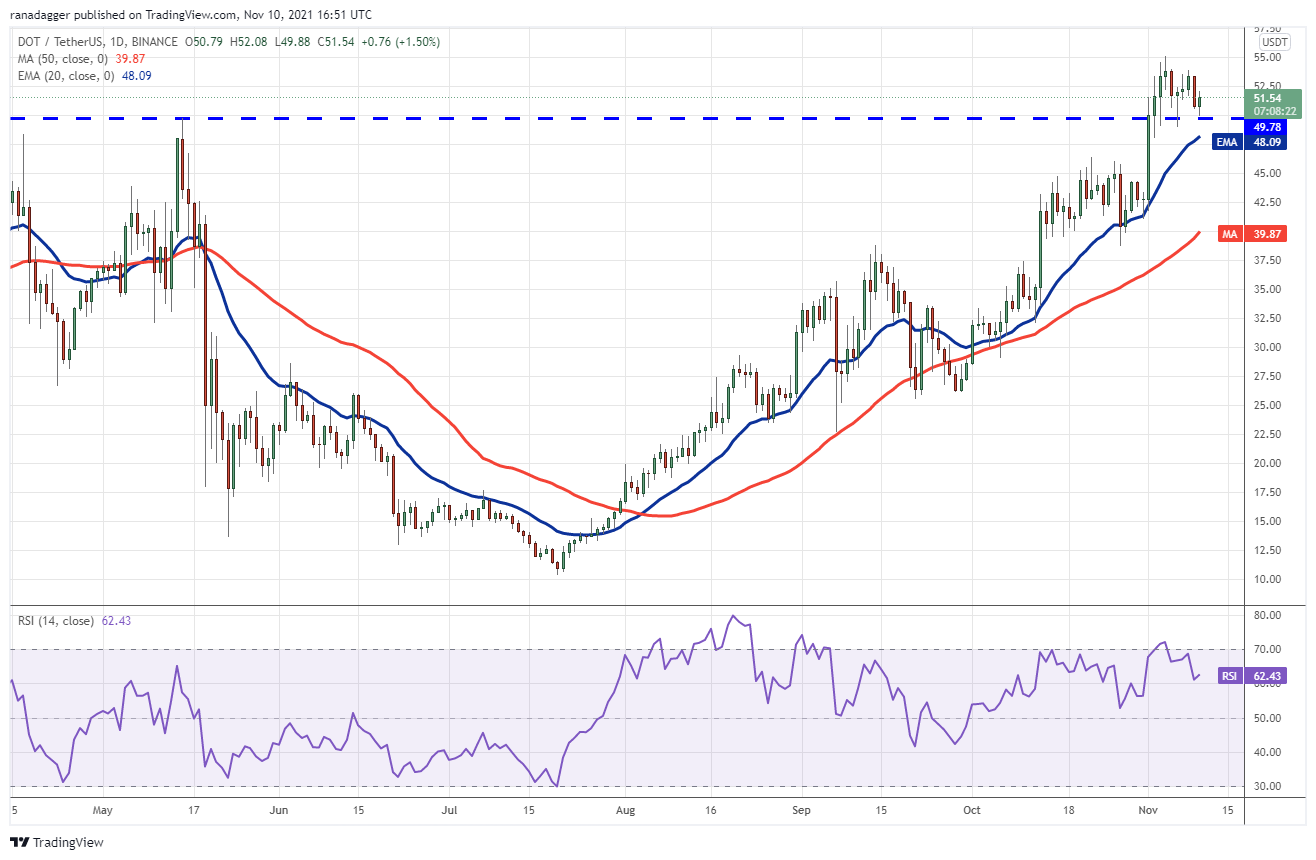 The repeated retest of a support level within a short interval tends to weaken it. If the price breaks below $49.78, the DOT/USDT pair could drop to the 20-day EMA ($48.09). This is an important support for the bulls to defend.

A strong rebound off the 20-day EMA will suggest that sentiment remains positive and traders are buying on dips. The bulls will have to push the price above $55.09 to signal the resumption of the uptrend. The next target objective on the upside is $63.08.

Contrary to this assumption, if the price plummets below the 20-day EMA, traders may rush to the exit. That could pull the price down to the 50-day SMA ($39.87). 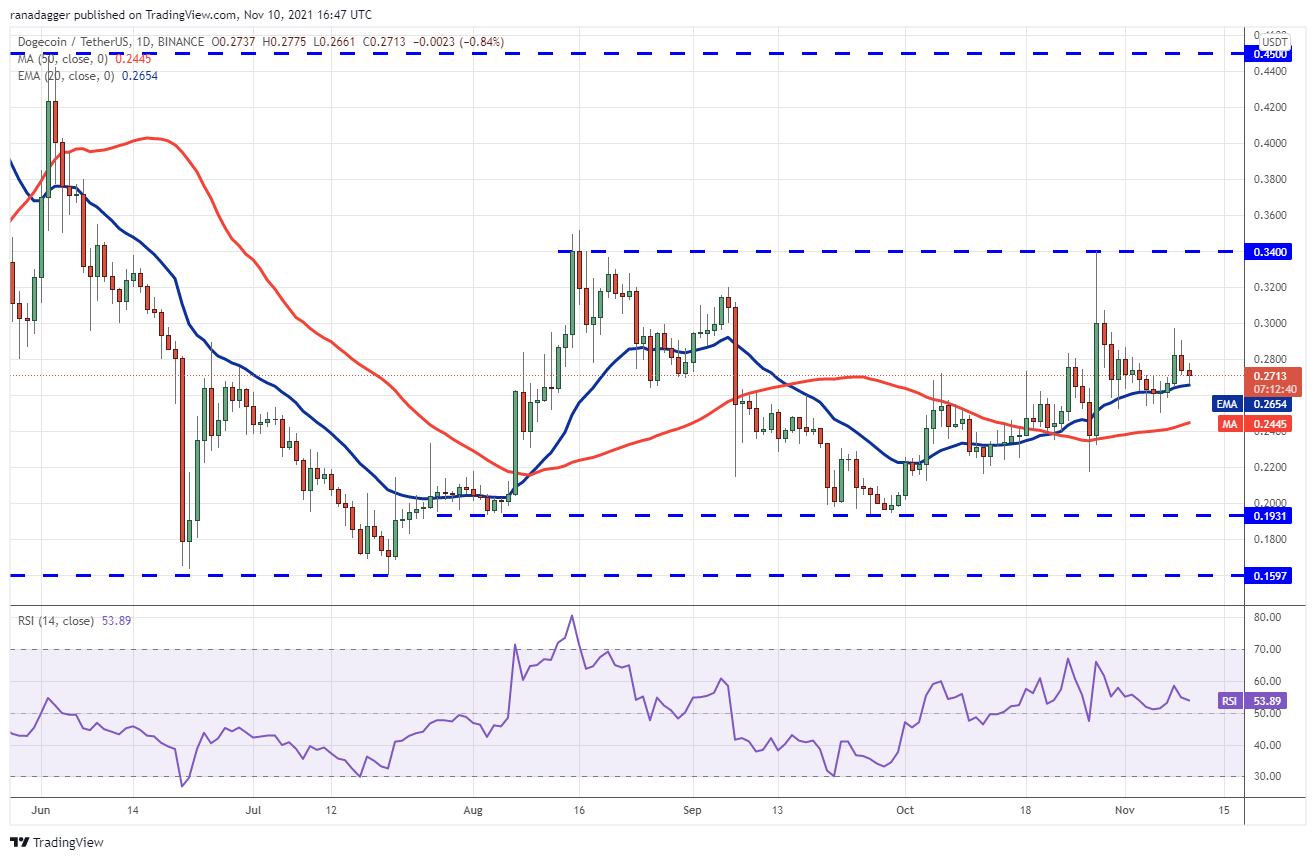 If the price rebounds off the current level, the bulls will again try to propel the DOGE/USDT pair above $0.30. If they can pull it off, the pair could challenge the overhead resistance at $0.34. A break and close above this level will signal that bulls have the upper hand.

Alternatively, if the price breaks below the 20-day EMA, the next stop could be the 50-day SMA ($0.24). If this support is breached, the selling could intensify and the pair may drop to the strong support at $0.19.

SHIBA INU (SHIB) rose above the downtrend line on Nov. 9 but the bulls could not sustain the higher levels. This shows that every rise is being sold by the bears. 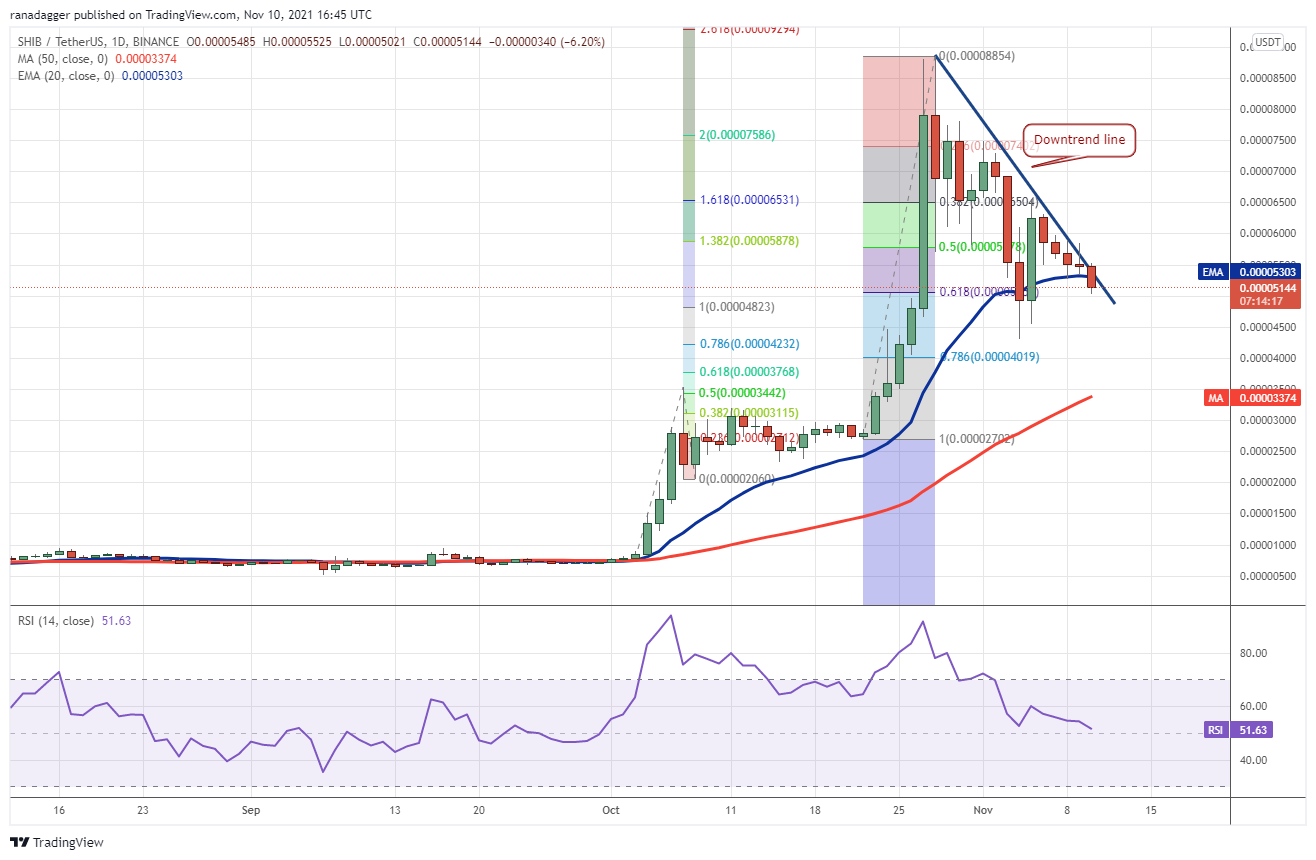 Contrary to this assumption, if the pair rebounds off the current level and rises above the downtrend line, it could reach $0.000065. The flattish 20-day EMA and the RSI near the midpoint suggest a range-bound action in the near term.

Terra’s LUNA token has been trading inside a rising wedge pattern. The bulls attempted to push the price to the resistance line of the wedge on Nov. 8 but could not sustain the higher levels. 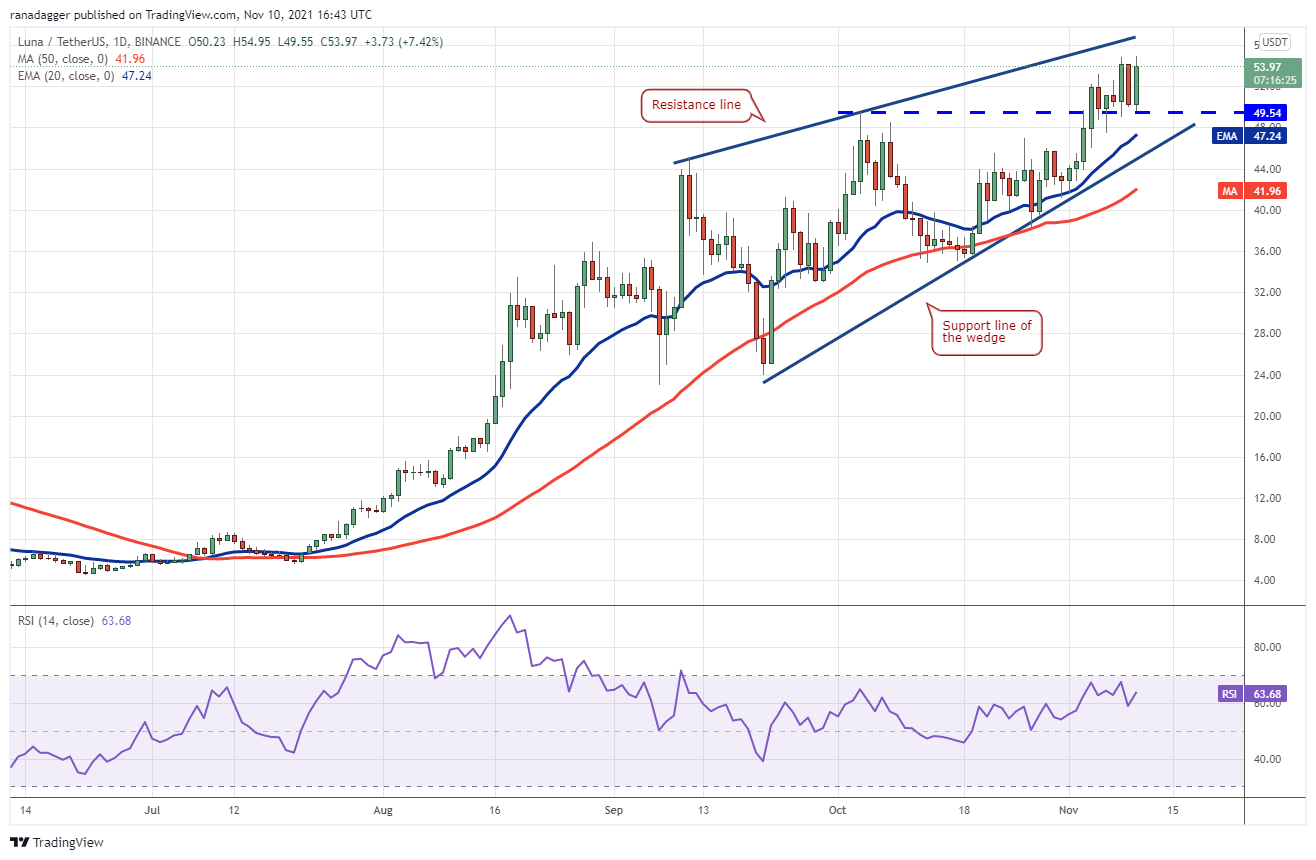 Profit-booking near the resistance line pulled the price back toward the critical level at $49.54 on Nov. 9. The strong rebound off this level on Nov. 10 suggests that bulls are defending this level with vigor.

The buyers will now attempt to push the price to the resistance line of the wedge. If bulls thrust the price above the wedge, the bullish momentum could pick up and the LUNA/USDT pair may reach $62.59.

This positive view will invalidate if the price turns down from the current level or the overhead resistance and plummets below the support line of the wedge.

The views and opinions expressed here are solely those of the author and do not necessarily reflect the views of Cointelegraph. Every investment and trading move involves risk. You should conduct your own research when making a decision.