Meme tokens and dogcoins have been an integral part of the ongoing market-wide bull run in the cryptocurrency markets. Among the plethora of these tokens that have been flooding the market, two of these tokens, the longer-standing memecoin Dogecoin (DOGE) and Shiba Inu (SHIB), have gained the most traction and popularity.

This led the token to briefly be featured in the 8th place on the list of top 10 cryptocurrencies by market capitalization, but due to the price drop, the token has slipped out of the top 10 to fall to 11th place with a market cap of around $32 billion at the time of writing. 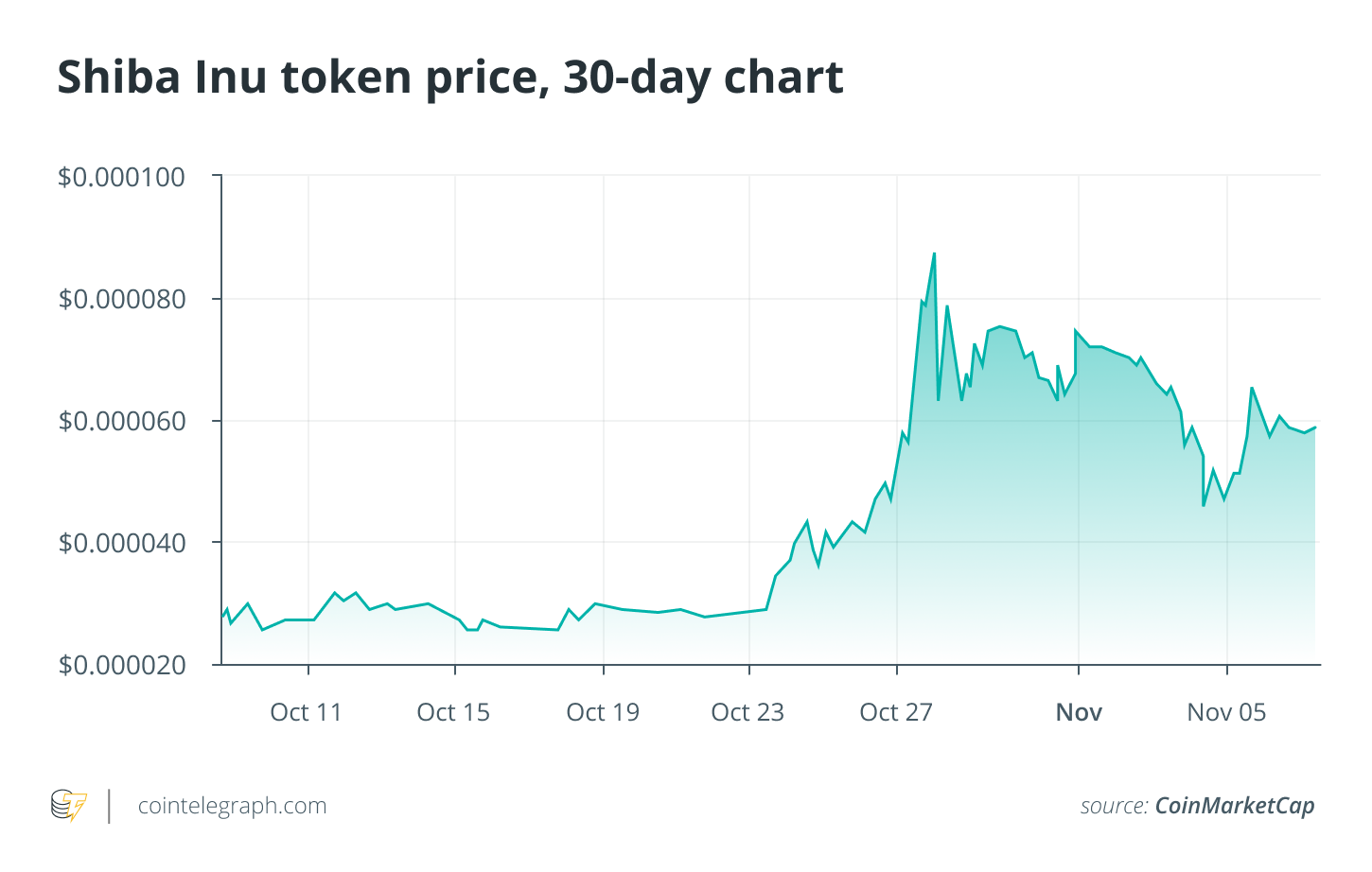 Such returns have put investments in the token in the running for the “Greatest Trade of All Time” as it is revealed that one crypto wallet address purchased SHIB tokens worth $3,500 in August 2020, which multiplied to become worth more than $1.55 billion at the market peak. Another wallet, at one point, owned more than 13% of the total supply of over 549 trillion tokens. However, this whale wallet moved $2.3 billion worth of SHIB tokens on Nov. 5 in four equal transactions to four different wallets that spooked the market and led to a significant drop in the price of the token.

These returns led to a lot of mainstream attention and around the token. In the aftermath of the all-time high, SHIB began to gain adoption for the utility of the token as well. Despite its extreme volatility, AMC Theatres CEO Adam Aron announced that the company is considering adding the token as payment for ticket purchases. Le Bistrot d'Eleonore et Maxence, a bistro in Paris, has begun accepting SHIB as a payment.

The momentum from the SHIB token carried over to DOGE as well as investors began to circulate their SHIB profits into DOGE, leading to the token gaining 44% in the one day on Oct. 28 and hitting a 90 day high of $0.33. This rally led the token to 9th place in the top 10 cryptocurrencies by market capitalization. The token currently trades at $0.25, nearly 65% shy of the all-time high of $0.73 the token hit on May 8 spurred by Elon Musk’s tweets shilling the coin. At the time of writing, the market capitalization is at nearly $35 billion. 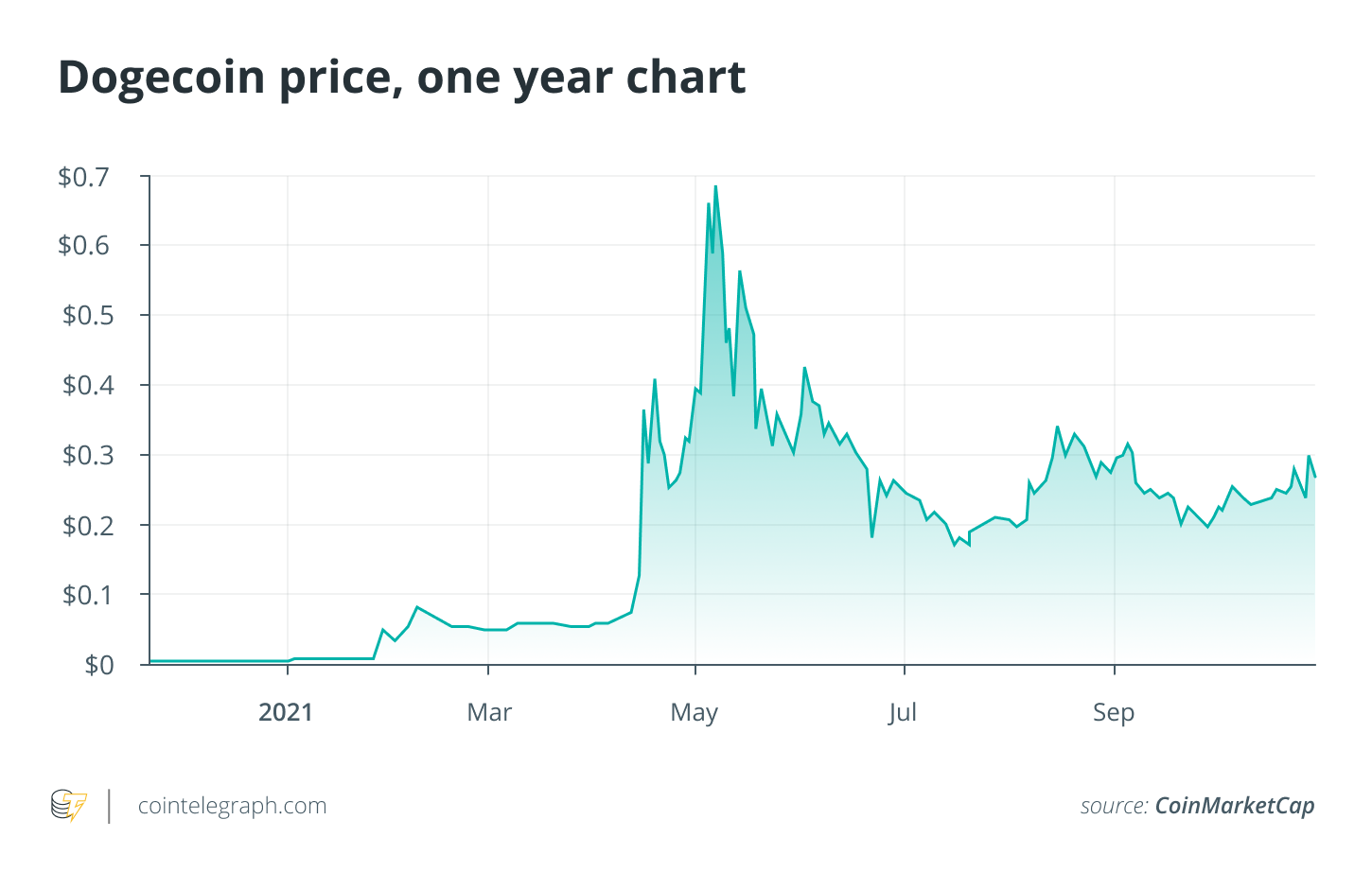 Cointelegraph spoke with Johnny Lyu, CEO of KuCoin cryptocurrency exchange, about this phenomenon that has gripped the attention of many retail investors. He said, “Popular meme coins burst into the top 10 and topped the charts for some time in terms of the volume of transactions on exchanges, overtaking even Bitcoin. We can say that the chances of becoming a permanent member of the top 10 club are quite high.”

So, if some of the more prominent memecoins have arguably "made it," can the other high-risk tokens join their company at the top of the market cap charts, or is there only room for so many tokens?

After the popularity of Dogecoin soared, there was a plethora of dogcoins and other meme tokens that joined the industry. One of these tokens was SHIB, which has since reached a market capitalization in the range of DOGE itself. The development team of SHIB also developed another token called Doge Killer (LEASH). The token currently exchanges hands at $3,256.73, posting a 130.3% return recently.

Another token that is attempting to capitalize on the ongoing hype is Dogelon Mars, a token that is based on Tesla CEO Elon Musk and his love for space travel. In October, the coin posted over 3,780% gains, along with getting listed on OKEx and Crypto.com on Oct. 29, surpassing SHIB’s 850% gains.

There are many more tokens that have launched on various blockchain networks, sending meme tokens all across the crypto ecosystem. For example, the Australian Safe Shephard (ASS) token is the dogcoin based on the Binance Smart Chain (BSC) and Samoyedcoin (SAMO) is a dogcoin on the Solana network.

Lyu mentioned that “It seems that the older the cryptocurrency, the stronger its position, and it is not so easy for beginners to get to the top and take their place under the sun.” He added that having two meme coins make it into the top 10 is more than enough and other meme coins don’t have a chance. However, he remarked, “But that's the beauty of cryptocurrency — anything can happen.” 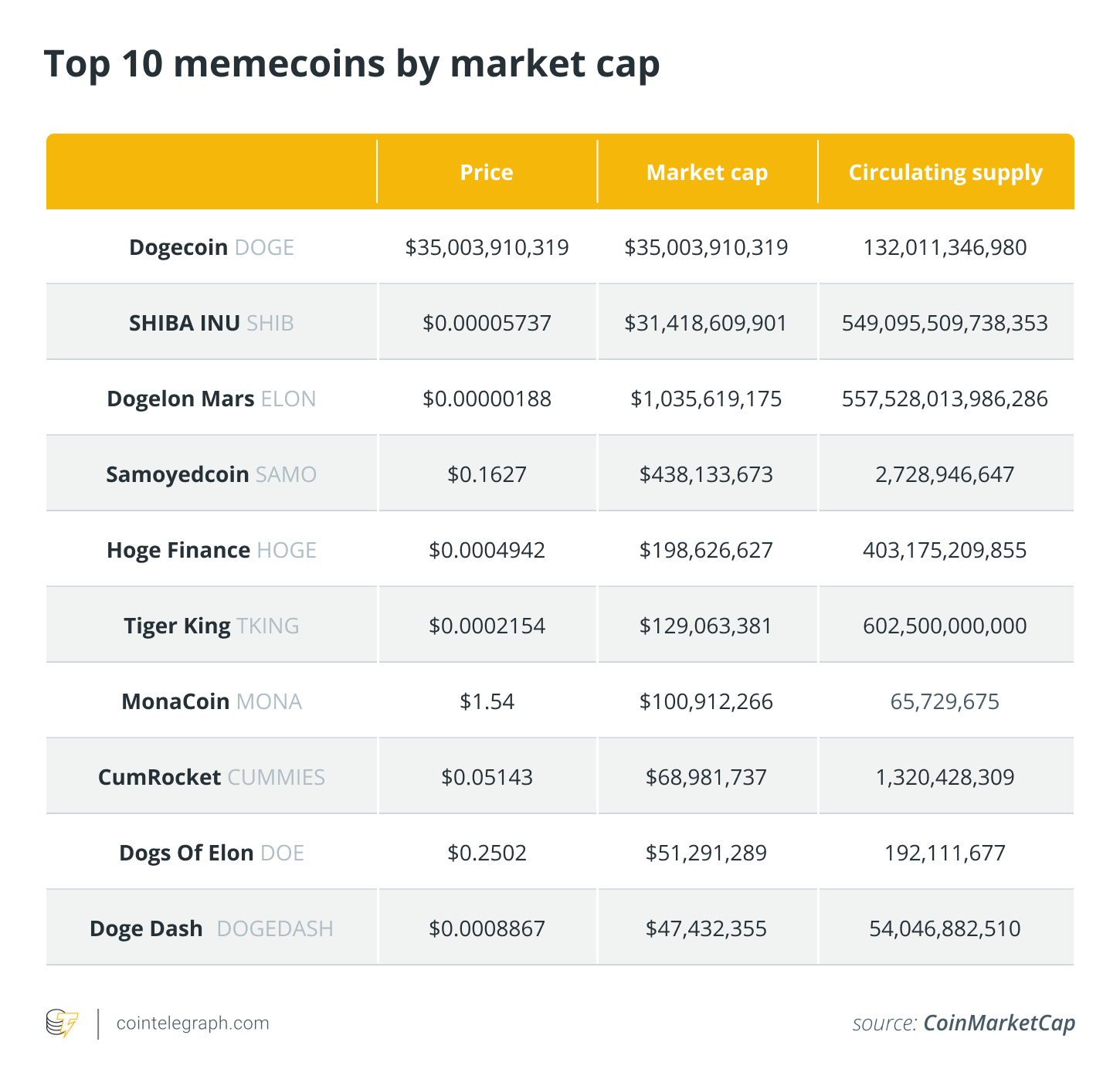 Justin Trollip, the core team member at Pangolin, a decentralized exchange, told Cointelegraph that the short-term potential of all the highly-speculative meme tokens and dogcoins across blockchains is unpredictable:

“We're in a raging bull market, so speculative assets that have huge upside tend to do well. We're in a meme cycle at the moment, so I think there's room for upside on a lot of these tokens. Again, it comes down to your time frames as an investor. Personally, most people I've seen that have made big gains on meme tokens generally fail to take profits and view them as long-term assets. I'd argue, this is a risky strategy.”

Several of the new meme tokens have posted impressive gains in October, with SAMO seeing 2,925% gains in October to hit a market capitalization of $389 million and Hoge Finance’s HOGE surged by 2,923% with its market capitalization currently standing at $189.79 million up from $15 million at the start of October. But, that’s not to say that these types of tokens will keep on posting such impressive rallies.

Related: All hail the Shiba? Rise of Dogecoin pretenders fueled by meme frenzy

Trollip added, “For these tokens to continue to perform well in the top 10 over the next few years, they'd need to outperform some pretty impressive projects and crypto's maturing investor class. I personally think they'll be overtaken over a longer time horizon.” He also mentioned that the recent trend of meme tokens is driven entirely by speculation and in some cases, even social media manipulation. But, as seen with SafeMoon, he believes there’s a limit to where marketing takes a token.

Social media is playing an important role in the rising adoption of these meme tokens and dogcoins. Elon Musk is one of the market forces that has, more often than not, indirectly been influencing the price movements of DOGE and Floki Inu (FLOKI) through sporadic Twitter posts.

However, it is arguable that such activities that directly impact the price of assets could be frowned upon by financial regulators like the United States Securities and Exchange Commission (SEC) and the Commodity Futures Trading Commission (CFTC).

On this perspective, Lyu opined that “If Elon received money for advertising from the creators of DOGE, then he should be held liable since he did not notify that his messages on Twitter were advertising. But, if Elon bought tokens and wrote that he believes in them, this is his right and there is nothing criminal in this.”

Such activities in the traditional financial markets with assets like equities, commodities, bonds, etc. are prohibited by financial regulators. As per Trollip, however, opening the doors to that world for crypto tokens would lead to the loss of Satoshi’s original vision:

“Currently traditional assets are still pumped behind closed doors in a regulated way. It's not that it's not happening, it's just that within that framework, the winners are already predetermined. I do worry that you're starting to see this creep into crypto already. With the current mania for get-rich schemes, most people don't care about the ethos of Satoshi and only care about money.”

It is possible that such an attitude would be extremely detrimental to cryptocurrencies in the long run. This could reverse the progress made over the years by the industry in general toward leading the financial world into an even more dystopian future.

Nevertheless, new meme tokens and dog coins are entering the market every day which retail investors tend to buy into in the hope to replicate the gains posted by DOGE and SHIB in the past. In fact, the hype for dogcoins has grown to such an extent that it’s reportedly even increasing the demand for real dogs.

While a fluffy Shiba Inu puppy is definitely a good way to ensure long-term happiness to the owner, meme coins are far from a sure bet and should be traded at your own risk. A speculative bet on a low market token may not payout, as can an investment in a well-established dogcoin since its upside and social media sentiment could already be at its highest.